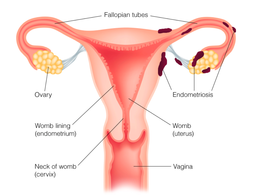 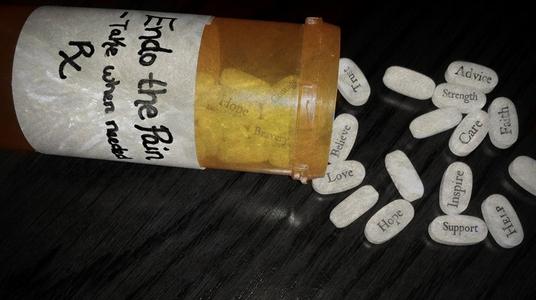 Endometriosis is a problem many women have during their childbearing years. It means that a type of tissue that lines your uterus is also growing outside your uterus. This does not always cause symptoms. And it usually is not dangerous. But it can cause severe pain and other problems.

The clumps of tissue that grow outside your uterus are called implants. They usually grow on the ovaries, the fallopian tubes, the outer wall of the uterus, the intestines, or other organs in the belly. In rare cases, they spread to areas beyond the belly.

Unlike normal Endometrium, these implants have no way of leaving the body and result in potentially crippling pain, scar tissue and adhesions, infertility and pregnancy loss, bleeding, inflammation, formation of cysts, and even blockage of nearby organs.

Experts do not know what causes endometrial tissue to grow outside your uterus. But they do know that the female hormone estrogen makes the problem worse. Women have high levels of estrogen during their childbearing years. It is during these years-usually from their teens into their 40s-that women have endometriosis. Estrogen levels drop when menstrual periods stop (menopause). Symptoms usually go away then.

What are the symptoms?

If you have some or many of these symptoms, please talk to your doctor!

Endometriosis varies from woman to woman. Some women do not know that they have it until they go to see a doctor because they cannot get pregnant. Some have mild cramping that they think is normal for them. In other women, the pain and bleeding are so bad that they are not able to work or go to school.

Treatments for Endometriosis include:

Over-the-counter pain medicines like ibuprofen (such as Advil or Motrin) or naproxen (such as Aleve). These medicines are called anti-inflammatory drugs, or NSAIDs. They can reduce bleeding and pain.

Birth control pills- They are the best treatment to control pain and shrink implants. Most women can use them safely for years. But you cannot use them if you want to get pregnant.

Hormone therapy- This stops your periods and shrinks implants. But it can cause side effects, and pain may come back after treatment ends. Like birth control pills, hormone therapy will keep you from getting pregnant.

Laparoscopy- surgery that remove implants and scar tissue. This may reduce pain for a period of time, and it may also help you get pregnant.

As a last resort for severe pain, some women have their uterus and ovaries removed (hysterectomy and oophorectomy). If you have your ovaries taken out, your estrogen level will drop and your symptoms will probably go away. But you may have symptoms of menopause, and you will not be able to get pregnant.

If you are getting close to menopause, you may want to try to manage your symptoms with medicines rather than surgery. Endometriosis usually stops causing problems when you stop having periods.

Stage I
This stage is described as minimal. There will be evidence of only a few small and superficial lesions scattered throughout the pelvic cavity, with the possibility of limited adhesions.

Stage II
This stage is described as mild. There will be evidence of superficial lesions with some lesions being visibly deeper and located in the cul-de-sac area of the pelvic cavity, which is between the uterus and the bowel.

Stage III
This stage is described as moderate. In addition to all the above lesions, there will be additional adhesions and scarring as well as Endometriosis implants evident on the ovaries. The endometriosis is more widespread than in Stage I and II.

This stage is described as severe. All the symptoms listed for stages I to III will be present in addition to large Endometriosis implants and extensive adhesions, which may have distorted or displaced some affected organs.


Up to 50 million women suffer from at least one chronic pain disorder. Current research indicates that these conditions frequently coexist or “Overlap”
-The Campaign to end Chronic pain in women-


Does Endometriosis ever go away?

In most Cases, the symptoms lessen after menopause because the growths gradually get smaller. For some woman, however, this is not the case.

Is there a cure for Endometriosis?

Currently we have no cure for endo. Even a hysterectomy or removing the ovaries does not guarantee that the Endometriosis areas and/or the symptoms of Endometriosis will not come back.